From dancing to dogs: the diversity of doctorates at UCL

What is the symbolic importance of masquerade dances in the Niger Delta? What kinds of knowledge do humans and dogs employ in scent-detection training in Euro-America? These are just some of the questions that students are exploring as they grapple with issues related to health and healing around the world. Every year, UCL’s doctoral students in Medical Anthropology present their research plans and latest findings to fellow staff and students at an annual seminar. The latest PhD day was held on 6th June and the diverse programme demonstrated once again the breadth and depth of research in our department. This year, the ten presenters updated us on their progress as they were about to enter the field or had returned from months of ethnographic research in places that ranged from Essex to Rio de Janeiro. Together, the talks shed light on some important themes that are central to the way in which people make sense of and deal with a range of health-related issues. In particular, research highlighted: the diverse ways in which people construct their identities and assert their agency when faced with sickness; the centrality of emotion and care as people, including researchers, navigate ill-health; and the myriad of ways that socio-economic, political and cultural factors coalesce to create complex health landscapes across the world. 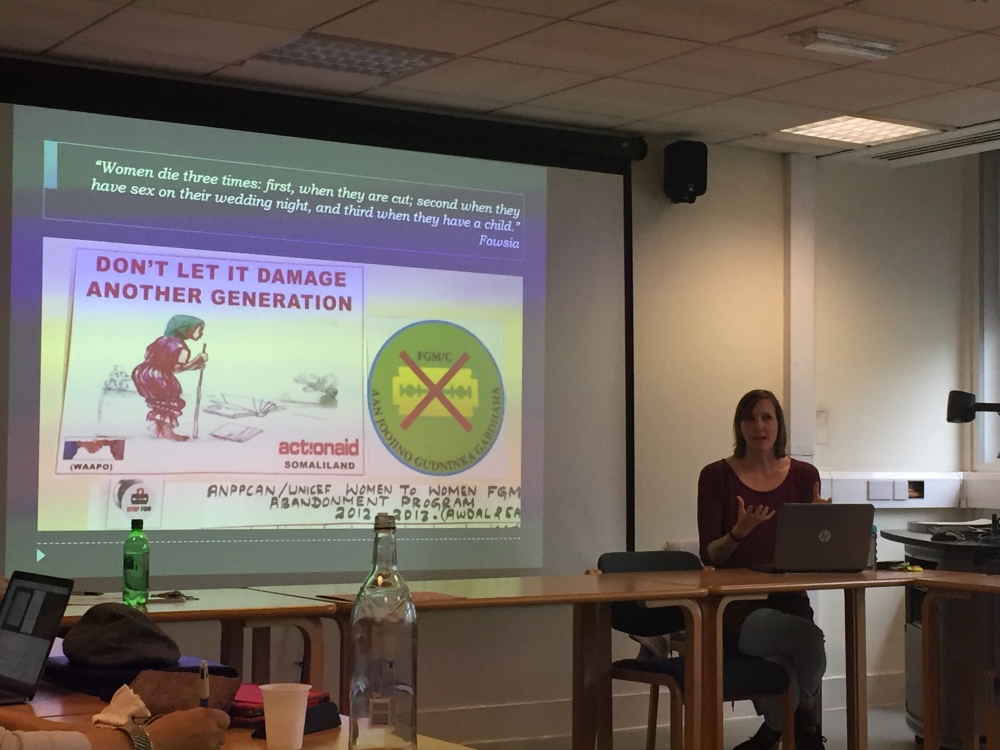 In her exploration of the way in which identity is constructed, Caroline Ackley found that the intimate relationships Somali women have with their bodies play a crucial role in forming identity over the life course. Contrary to much of the global public health literature that focuses on the health effects of practices such as female genital cutting and skin-whitening, Caroline’s work sheds light on the way in which these ways of modifying the body also act as a means for women to ‘shine’ and in doing so, work on their own destiny – a destiny that nearly always includes love, marriage, and children. Kelly Robinson’s work among British deaf people also highlights the very visual and tactile ways in which deaf people construct their own identities as they explore and experience space and time through a process of what is referred to as ‘climbing inside’. Although central to the way in which deaf people experience the world, this expressive mode of experience and communication is somehow flattened in the process of filling out the bureaucratic forms that are needed to claim benefits and healthcare from UK front-line services.

The friction that arises when people express aspects of their identity in the context of receiving care is also at the heart of the way in which local residents in Santa Cruz, Rio de Janeiro communicate their experiences of living with the health consequences of the ‘chuva de prata’ or the ‘silver rain’ that now cascades over their local area as a result of the nearby steelworks. At campaign events run by a local NGO, residents perform their emotional and physical wounds for reporters, lawyers and even anthropologists such as Delia Hollowell who attend these events. Although perhaps uncomfortable, difficult and emotionally challenging to witness, as Delia demonstrates, for the ‘victims’, these expressive ways of communicating create agency within victimhood, dignity out of shame and hope from on-going struggle for the people who live with conditions such as rashes, shortness of breath and joint pain. As such, this work highlights the ways in which emotion is expressed in times of ill-health and the productive consequences it can have for those who are suffering. By contrast, Ignacia Arteaga’s 17-month ethnographic study in London demonstrates clearly how providing care for others such as those who have experienced invasive colorectal cancer treatments, can also involve instances of containing emotional expression. Here, the frustration of painful, incapacitating and sometimes unsuccessful treatments is managed, not through displays of emotion between patients and carers, but instead through the expression of silence. Here, the act of ‘swallowing’, does the emotional work of helping people to cope, maintain their social relationships and ultimately ‘get on’ with life in these very difficult times. 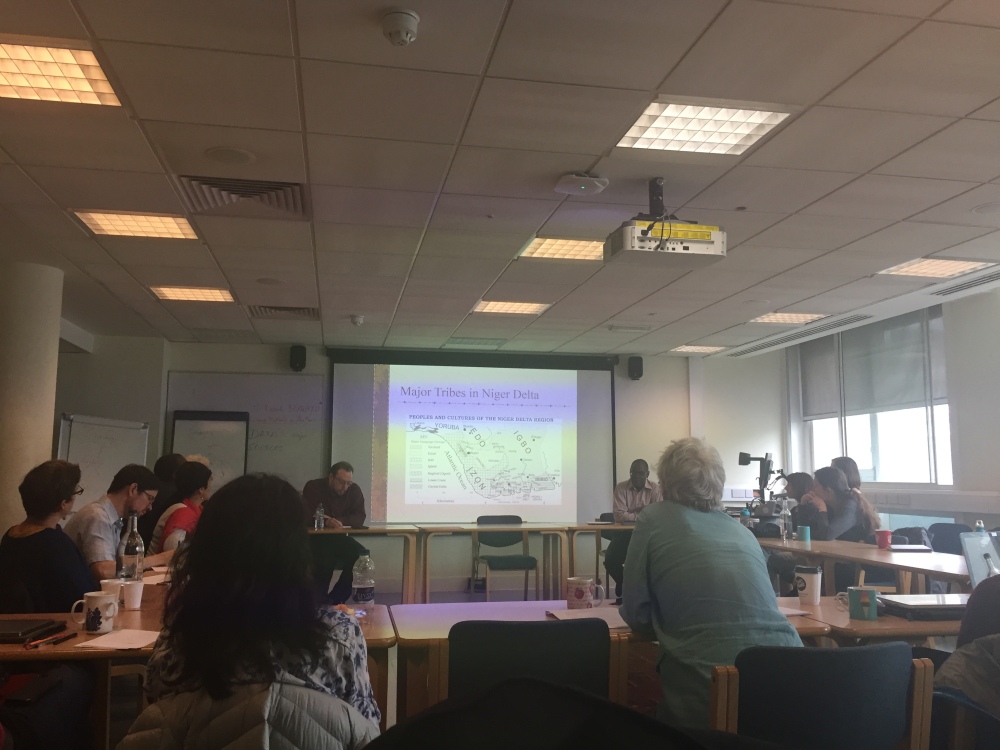 As well as highlighting several important aspects of the lived experience of dealing with ill-health, these papers also shed light on the range of healthcare options available to people around the world. The women suffering from perinatal and parental mental health problems in Essex that Hamideh Waite plans to work will no doubt have to traverse a complex myriad of healthcare options as they make sense of their diagnosis and treatment plans. A similar breadth of healthcare options are found in Southern lowland Lao PDR where Elizabeth Elliott has recently conducted 18 months of fieldwork. Here, she examined practices of care provided by village healers, villagers, local hospital staff and government institutions. In an area where this rural population faces complex issues in obtaining access to healthcare, the work of rural healers has a high social value and medicinal plants in particular, play a central role in the healing process.

The sheer complexity of health issues and therapeutic landscapes presented at this year’s event also highlights some of the methodological challenges we are faced with as researchers conducting anthropological research. Elizabeth’s work on plants highlights well concerns over how we study other species that are implicated in anthropological research as well as the potential productivity that can come from taking a multidisciplinary approach to such issues. This was also at the heart of Katrina Holland’s work as she is exploring the ways in which knowledge that both humans and dogs possess is incorporated or left out of the scientific studies and practices that inform scent-detection training. For her, the question is how she can best understand the animals that are the object for her study. However, these talks also remind us of the need that we have as anthropologists to always reflect on the extent to which we can ever really understand the worlds of ‘others’, no matter the species. As well as methodological issues accessing data, other students highlighted the intellectual problems we face trying to apply academic theories to the way we interpret our data. William Obomanu for example, discussed the challenge he is currently facing integrating and hopefully building on a large body of existing ethnography and theory on ritual as he is about to embark on his own research exploring masquerade dances in Niger. 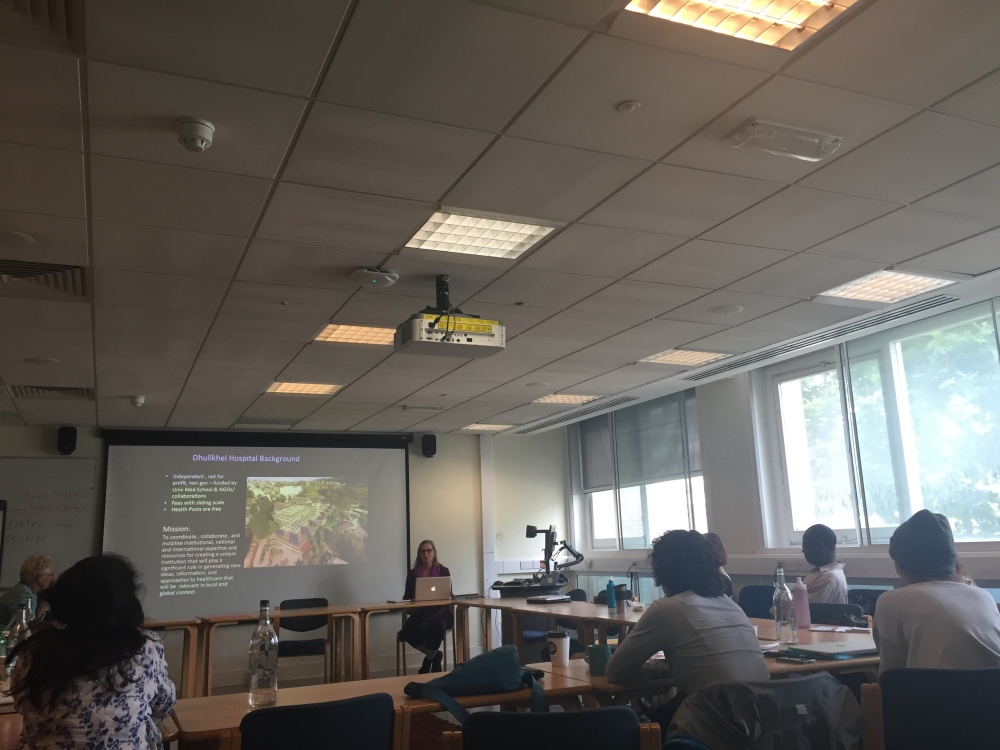 In addition, many of the talks also highlighted another important aspect of research – the ethical questions that arise when studying issues related to health. For example, Paula Bronson discussed the moral implications of carrying out her role as a physiotherapist treating musculoskeletal conditions in a rural clinic Kathmandu at the same time as carrying out her role as an anthropologist conducting research. Reconciling different roles, aims and objectives is a dilemma faced by many of us in the field and something that Rebecca Williams also discussed in the context of her work with terminally ill undocumented migrants in the UK. For her, the requirement to ensure the anonymity of her participants imposed on her by ethical committees was at odds with her desire to give accurate voice and representation to the individuals and communities with whom she worked.

Together, the presentations given at this year’s PhD day were both testament to the diversity of Medical Anthropology research at UCL and examples of the important intellectual, methodological and ethical issues that arise in this important area.